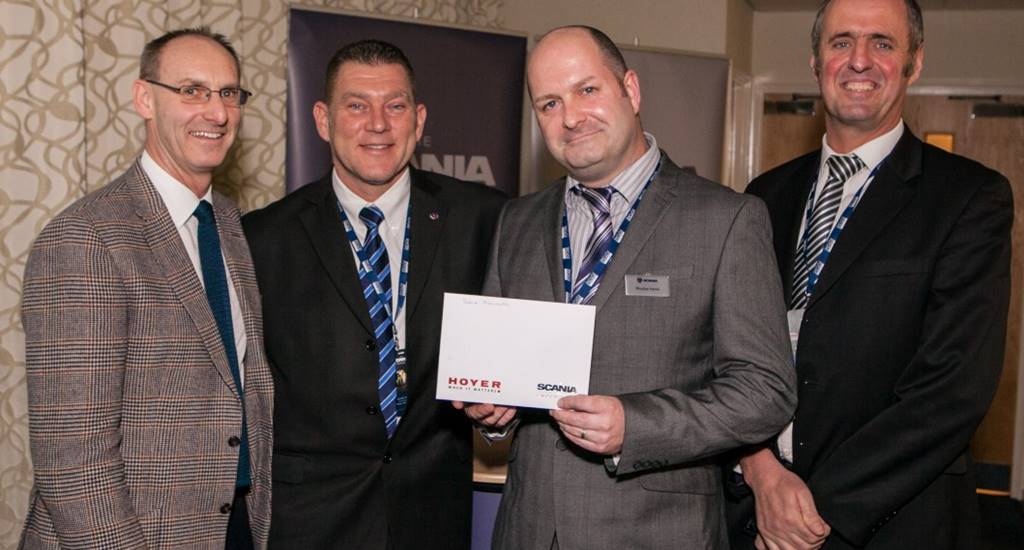 A fundraiser for Transaid to coincide with the awards raised £2000 for the charity.

Scania Avonmouth was awarded with the HOYER Dealer of the Year Shield for achieving a 100% MOT first time pass rate, fleet availability of 96.9%, zero fleet safety incidents and 99.72% delivery performance.

The team at Avonmouth looks after seven trucks for HOYER Petrolog’s Esso estate business based at the Esso Fuel Terminal in Avonmouth.

The Technician of the Year Award was presented by Mark Grant, Scania Aftersales Director, to Dave Pougher from Scania Avonmouth.

Mr Pougher won the award for “creating an excellent preventative maintenance culture leading to greater customer up time, as well as controlling costs”

The Outstanding Achiever Award in 2015 was presented to Kevin Hood from Scania Purfleet.

Kevin was nominated by both his own manager and the HOYER Purfleet Manager Joe Lydiate who described Kevin as having a “can-do” attitude and being a “real cornerstone of the HOYER-Scania relationship”.

Joe said: “On a number of occasions Kevin has changed his own personal commitments to accommodate HOYER at weekends and late in the evening. Despite this Kevin is always at the end of the phone and always available to offer help and his knowledge.”

Matthew Cox, Fleet Engineer at HOYER, said: “I would like to congratulate this year’s winners and finalists. These awards recognise the strong working relationship between HOYER and the Scania team who have helped deliver exceptional performance contributing to improved service levels for the fleet in 2015.”