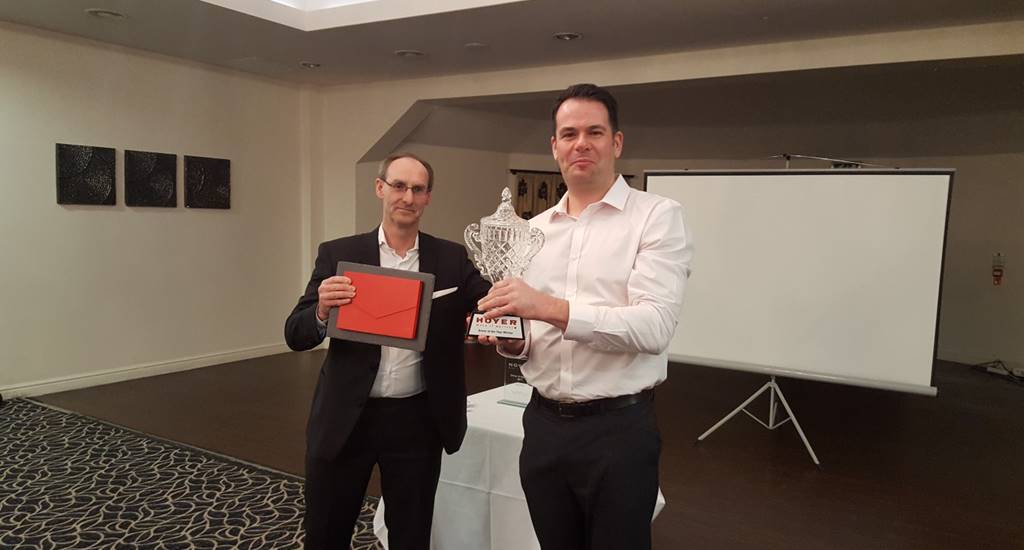 Three HOYER drivers have taken top honours in the HOYER PETROLOG Driver Of The Year Awards, 2017.

Over a period of eight months, from May to December 2016, all HOYER drivers competed to qualify for a place in the final ten of the “Driver of the Year” competition. Drivers with the highest safety & efficiency scores (taken from the vehicle’s On-Board Truck Computer), along with a faultless safety and service performance, represented their contract and terminal at the final.

The prize for the overall winner, Sion, was presented with a trophy and a £2250 Red Letter Day prize vouchers with runners-up David and Stephen each receiving trophies and £1000 and £500 respectively in Red Letter Day vouchers.

Sion has been working on the Shell contract for 17 and a half years and this was the second time that he qualified for the final of the DOTY competition. Sion enjoys keeping fit and is a keen gardener.

David works on the Esso Contract at Grangemouth and prides himself on safety and customer service, he has had no incidents in 11 years of working for HOYER and dropping only seven loads in this time. David’s attendance is exemplary at 100% and his claim to fame is that he has worked out of every HOYER depot around the country.

Stephen has worked for HOYER on the Shell contract for 11 years and this was his second time at the DOTY final after coming 3rd in 2016. In his spare time, he enjoys socialising and playing golf at The Chase, Cannock, playing off a handicap of 9.

Gareth Sterland, Contract Manager for HOYER Petrolog UK said: “It took hard work, skill, consistency and knowledge to qualify for one of the ten finalist positions from across our contracts and from more than 1000 drivers. This was a great accomplishment and really showed that our ten finalists are among the highest skilled in the industry.”

“Sion, this year’s winner was consistent throughout all the events and quietly went about the business of getting the job done. Sion was a returning finalist but we ensured that the events were different and more difficult than the previous year and his overall calm and steady approach won the day for him as well as a perfect performance in the lane change event, well done indeed.”

Mark Binns, MD of HOYER Petrolog UK, who presented the drivers with their awards said: “The Driver Of The Year competition was launched in 2015 in the UK and has proved a popular innovation with drivers on different contracts and locations competing to demonstrate the highest levels of professionalism and expertise in their work. We are proud of the standards all our drivers achieve on a daily basis from locations across the country. The award winners, along with all the finalists, are to be congratulated in showing an exemplary approach to delivering the highest possible quality of service whilst maintaining an outstanding safety performance.”

Adrian Slade of Sigma Studies which partnered with HOYER UK in creating the finals event said: “It was important that each of the events had been designed to push the drivers to the limit of their skills. With over 23 years of advance driver training, our sister company IRST (International Road Safety Training) was employed to create the events based on proven safety training methods and techniques. Each of the events not only provided a very different challenge, but also provided an opportunity to further enhance their driving skills. The finals where competitive and closely contended and we congratulate not only this year’s winner Sion, but all the finalists that took part.”